I have been delving into some data analysis again. There are two pictures I would like to share to clearly demonstrate the futility of the current corona vaccines. The plots are based on excess mortality in the EU and the vaccination rate as provided by the EU.
The first plot shows the overmortality compared to the 5 years before corona (red curve). The green curve shows (on an unrelated axis) how many people got their first vaccine. What is surprising, is that the vaccine correlated with a spike in overmortality. This is to be expected because the elderly were the first to receive them. From that perspective: the vaccine functions as a weed-whacker. If the vaccine doesn’t kill grandpa, then corona probably won’t either.
The second point often heard is: the vaccines are efficient. Looking at this plot, this is difficult to confirm. The first peak, had a total overmortality of ~170’000. The second peak an overmortality of ~275’000. And the third peak, which we are only halfway, already has an overmortality of ~161’000. When that peak is over we are very likely looking at ~300’000. Thus: there is no measurable positive impact of vaccination. You might argue: ‘yes but without the vaccine it would be worse’. On the contrary, Such ‘pandemic’ tends to become endemic after a series of peaks, even without vaccination. So the lower peak amplitude we see now, would very likely have happened without the vaccine as well.
In the first plot I only looked at excess mortality towards the baseline, without adding any standard deviations. If we add 4 sigmas, we end up with pretty much the same results. Peak1 ~ 47’000 death, Peak2: ~91’000 death. Peak3: currently 65’000 death, expected ~117’000. However, in this plot it becomes even more apparent that vaccination had no measurable impact.
Any feedback that does not involve calling me names is welcomed. In particular I am interested to look further into the difference between the vaccinated vs non-vaccinated group, but it is truly hard to find any reliable data on this. 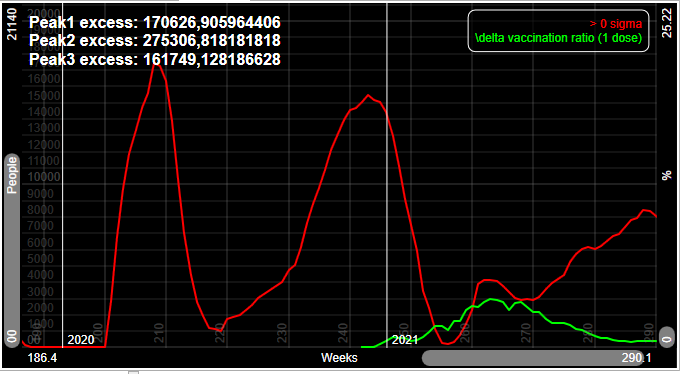 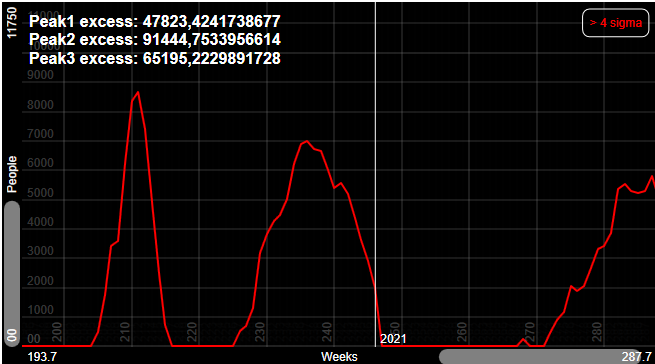