As with every year: the wikimedia foundation is begging for money again. So I thought: let’s have a look at how my money would be spend.

About 1/4th of the money would be spend on administration. Not that I mind some administration but that is excessive. Let’s say they get around 20’000’000 EUR in donations.  5’000’000 EUR for administration of wikipedia is too much. The box ‘fundraising’ of course says that some fundraisers get their money back by being hired by wikimedia. In that case their ‘donation’ is no donation and should not be listed as such.

A further graphic of the year 2014 shows that less than 40% of the money would be spent on actual product improvement. Around 60% goes to administration of sorts.

If you are someone living in germany and you wonder how your donation will benefit the locality: it won’t do very much. Your donation is largely funneled into the US. And even less of that money is spend on product improvement: 11%. 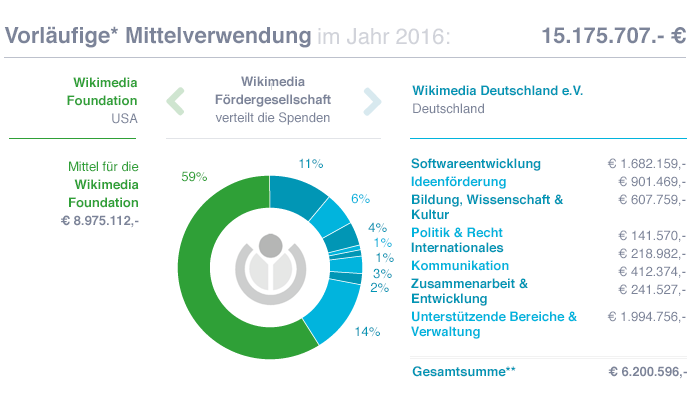 With the current set of employees and wikipedias consistent hunger for money, the natural question to ask is: what happens when people are tired of donating to wikipedia ? Is wikipedia sustainable ?

Will all the content be ripped from the net, slowly decay into irrelevance, filled with more spam, less content ?

I guess the only way to make wikipedia truly sustainable is by making it peer to peer. Storing all articles in a completely peer to peer manner.

And as expected if you only want to support bureacracy. Two years later: https://www.theregister.co.uk/2017/06/07/golden_handshakes_at_wikipedia/

2 thoughts on “Is Wikipedia sustainable ?”